This article is about the existing chain of restaurants. For the Homewood restaurant that operated in the 1940s and 1950s, see Hamburger Heaven (Homewood).

Hamburger Heaven is a chain of fast food restaurants owned by Pete Flach, his wife and his father-in-law Eli Stevens. The chain currently consists of two restaurants owned by Flach and Stevens, plus three franchises. The restaurants are known for making their hamburgers and sandwiches by hand and for having its own special sauce. 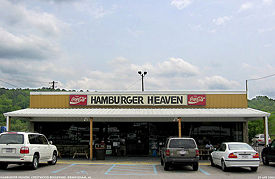 Hamburger Heaven was founded in Irondale in 1982 by Jack Caddell, best known for starting the Jack's chain. In 1992, a year after Caddell's death, Stevens bought the business from Catherine Caddell and placed Flach in charge of operating it. On June 15, 1998, a second location was opened on U.S. Highway 280 in Inverness near the Brook Highland Shopping Center.

In January 2007, Hamburger Heaven's first franchise, owned by Kirk Roberts, opened at 180 Oxmoor Boulevard in the former Cinco de Mayo Mexican Restaurant location in Homewood. A second franchise, owned by Allen Folse, opened in a former Burger King location on U.S. Highway 31 in Gardendale on February 26, 2007. In February 2008, the Gardendale location became the only resturant in the chain to open on Sundays. Roberts started offering breakfast at the Homewood location on February 1, 2010. On the same day, Flach, Folse and Roberts opened the chain's fifth store, located in a former Hardee's on Pinson Valley Parkway in Tarrant.