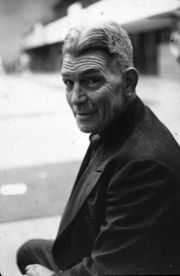 Henry Gorham "Hank" Crisp (born December 10, 1896 in Crisp, North Carolina; died January 23, 1970 in Birmingham) was a football, basketball, baseball and track coach and administrator. He was on staff with the Alabama Crimson Tide from 1924 to 1957, with brief tenures elsewhere.

Crisp moved with his family to Falkland, North Carolina in 1901 and helped out at his father's retail store. At the age of 13 he lost his right hand while cutting corn to fill a silo. He did not let his handicap affect his interest in sports, and he excelled in football, basketball and track at Blackstone Military Academy and Hampden-Sydney College. After two years he transferred, along with his coach, Charles Bernier, to the Virginia Polytechnic Institute and State College. He lettered for four years at VPI in football, three in basketball, and one in track, while also pitching for the Gobblers' baseball team. In his senior year, with Crisp as caption, the Gobbler were undefeated and were crowned champions of the South Atlantic Intercollegiate Athletic Association. 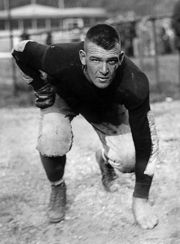 After graduating, Crisp pursued a baseball career for one season, then followed Bernier to Alabama, where his mentor was athletic director and head basketball coach. He began his career at the University of Alabama in February 1921, serving as a track coach and line coach for Xen Scott's football team. On the gridiron, Crisp implemented the first spring practices.

Crisp was appointed to succeed Wallace Wade as athletic director, effective September 1, 1930, but remained a football assistant under Frank W. Thomas, where he took on the role of disciplinarian and also recruited Paul Bryant from Arkansas. He remained director for 10 years, until a debilitating sinus infection prompted him to take a leave of absence. Crisp returned as a member of Thomas' staff. He took a leave of absence after the 1941 season to serve as a physical training instructor at the Navy's pre-flight school in Athens, Georgia. He was an assistant for the Georgia Pre-Flight Skycrackers, who defeated the Crimson Tide 35-9 in an exhibition at Legion Field in 1942.

He returned to the Crimson Tide in 1945, but left after the season to become an assistant with the Miami Seahawks of the All-America Football Conference. In 1947 he returned to college coaching with the Tulane Green Wave in New Orleans, Louisiana. After two seasons he returned to Alabama.

Crisp was also an assistant and co-interim head coach for the Miami Seahawks in 1946 and a line coach for Tulane University in 1947. During his time on the Green Wave staff, he continued to reside in Tuscaloosa and to help his family operate a service station there. On December 27, 1949 Crisp rejoined the Alabama staff as a line coach under Red Drew. In 1953 the University of Alabama Alumni Association presented Crisp with an automobile and government bonds in appreciation of his 25 years of service. He returned to the position of Athletic Director in 1954 and remained on Ears Whitworth's staff in 1955, but retired from both positions after three losing seasons. Incoming athletic director and coach Paul "Bear" Bryant asked him to stay on staff and assist in recruiting.

In retirement, Crisp remained active on campus, directing intramural athletics programs through 1967. In 1970 he was inducted into the Alabama Sports Hall of Fame in recognition for his contributions to sport in the state. However, he suffered a heart attack at the Hall of Fame banquet in Birmingham in January 23 and died at UAB Hospital.

The Crimson Tide's indoor practice facility, completed in October 1986 was named in honor of Crisp in April 1991.