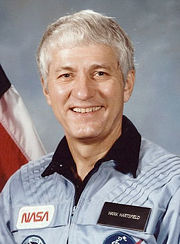 Henry Warren "Hank" Hartsfield, Jr (born November 21, 1933 in Birmingham; died July 17, 2014 in Houston, Texas) is an astronaut who logged 483 hours in space on three space shuttle missions and commanded the maiden flight of the shuttle Discovery.

Hartsfield was born in Birmingham and graduated from West End High School. He went on to Auburn University where in earned his bachelor of science in physics in 1954 and earned an Air Force commission through the ROTC program. He entered the Air Force in 1955 and served with the 53rd Tactical Fighter Squadron in Bitburg, Germany. He completed the USAF Test Pilot School at Edwards Air Force Base and continued there as an instructor until he was assigned to the Manned Orbiting Library Program as an astronaut in 1966. In 1969 he became an astronaut for NASA and served on the support crew for Apollo 16 and for the 2nd, 3rd and 4th Skylab missions. Meanwhile, in 1971 he completed a master of science in engineering science at the University of Tennessee. He retired from the Air Force in 1977, continuing as a civilian astronaut with NASA, where he helped develop the space shuttle entry flight control system.

Hartsfield was a backup pilot on shuttle missions STS-2 and STS-3. His first spaceflight was as the pilot of the Columbia on mission STS-4 in June 1982. He commanded the Discoverys maiden flight (STS 41-D) in August 1984 and STS 61-A, a 12-man Challenger mission which carried Spacelab D-1 into orbit in October 1985.

In 1986 Hartsfield was promoted to Deputy Chief of the Astronaut Office and, a year later to Deputy Director for Flight Crew Operations at the Lyndon B. Johnson Space Center in Houston, Texas. In 1989 he accepted a temporary assignment to Director of Technical Integration and Analysis at NASA headquarters in Washington D.C. His task was to oversee coordination of International Space Station missions with space shuttle capabilities.

In 1990 he took another temporary position, this time as Deputy Manager for Operations in the Space Station Projects Office at Marshall Space Flight Center in Huntsville. In 1991 he returned to Johnson Space Center to oversee aspects of the Space Station Freedom Program. In December 1993 he became the manager of the International Space Station Independent Assessment, a responsibility which was expanded in 1996 with assessment of the Human Exploration and Development of Space (HEDS) Enterprise.

After Hartsfield retired from NASA in 1998 he worked for Raytheon Corporation in Houston, Texas until his retirement in April 2005.

He married the former Judy Frances Massey of Princeton, North Carolina and had two daughters. Hartsfield died from complications following back surgery in July 2014.