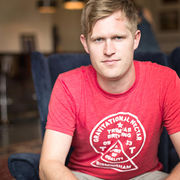 Harris Stewart (born in Tuscaloosa) is the founder and CEO of Trim Tab Brewing.

Stewart earned his bachelor's degree in environmental police at the University of North Carolina in Asheville in 2007. While there he worked as a research assistant at the National Environmental Modeling and Analysis Center. He also worked as a radio deejay and became interested in brewing beer as a hobby. After graduating, he worked for two years for Vanir Energy and helped manage a database for the United Nations Framework Convention on Climate Change.

In 2010 Stewart enrolled at the University of Alabama School of Law. His passion for brewing often overtook his studies and he founded Trim Tab. The name refers to the small part of a rudder that ultimately changes the course of a large ship, and was inspired by Stewart's interest in Buckminster Fuller's concept of social responsibility.

In 2012 Stewart made the winning pitch in George Barber's offer to give away a small vacant lot at 211 Richard Arrington, Jr Boulevard North. The proposal for a "Trim Tab Brewhouse & Hot Chicken Kitchen" proved impractical for the site, but Stewart eventually was able to lease part of the building that once housed the Barber Museum of Motorsports on 5th Avenue South for a brewery and tap room which opened in February 2014.