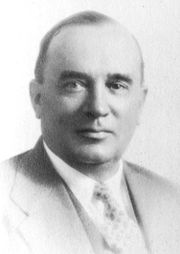 Harry Hayden Hawkins (born August 25, 1885 in New Harmony, Indiana; died May 6, 1973) was an artist and interior decorator, best known for his large-scale murals.

Hawkins was the son of Fountain Posey and Harriet Brown Hawkins. He attended the Art Institute of Chicago and was a student of John Singer Sargent. He created a mural in the Working Men's Institute Library in his home town. He married the former Julia Soper Osborn on March 12, 1911 in Posey County, Indiana.

After coming to Birmingham, Hawkins was commissioned in 1913 to paint the monumental proscenium mural, "The Allegory of the Muses" at the Lyric Theatre. In 1929 or 1930 he founded the interior decorating firm of Hawkins Israel Company in the former James Van Hoose residence on 20th Street South. That firm passed to his son, Harry O. Hawkins and is still operated by his granddaughters Jane Hoke and Harriet Adams in Mountain Brook and Northport.

Though he had not painted large-scale murals since the Great Depression, Hawkins did pick up his brush to create a wall painting of the Old Mill for the dining room of Britlings' "Britling By The Brook" restaurant at Mountain Brook Shopping Center in 1961.

Hawkins died in 1973 and is buried in Elmwood Cemetery. He was survived by his wife and three children, Sarah, Harry Osborne and Arthur Lynn.