From Bhamwiki
(Redirected from Herzing Institute)
Jump to: navigation, search 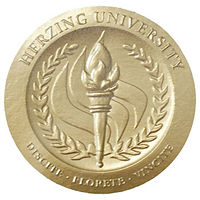 Herzing University (formerly Herzing Institute and Herzing College) is a for-profit, career-focused, regionally accredited business and technology school with 13 campuses in the United States and Canada. The school was founded in 1965 in Milwaukee, Wisconsin as a computer training school run by Henry and Suzanne Herzing. As of 2012 the school had eleven campuses in eight states.

The Birmingham campus of Herzing also started in 1965 as the locally owned Electronics Computer Programming Institute, located in the Highland Point Plaza building at 1218 20th Street South. In 1968 the Herzings purchased the school, and in 1970 its name was changed to Herzing Institute. In 1994 the school moved to its present location, 280 West Valley Avenue in Homewood. The president of the Homewood campus is Sarah Higgins.

The school changed its name to Herzing College of Business and Technology in 1996, then to Herzing College in 1998. It adopted its present name on March 2, 2009, after launching master's degree programs. Herzing University is accredited by the Higher Learning Commission based in Chicago, Illinois.