Hewitt-Trussville High School (HTHS) is a four-year public high school in the Birmingham suburb of Trussville located at 6450 Husky Parkway. It is the lone high school in the Trussville City Schools. The "Hewitt" moniker comes from the early local educator Robert Hewitt. School colors are red, white, and gray. The athletic teams are called the "Huskies". The current facility was opened October 14, 2008.

Originally called R.G. Hewitt High School, HTHS was established in 1925 on Chalkville Road and graduated its first students in 1927. By 1938 the student population had outgrown the facility, leading Jefferson County Schools to request that a community center under construction in the Cahaba Homestead Village be used as a high school instead. This building, located at 301 Parkway Drive, would serve as Trussville's high school until a new high school campus was constructed on Trussville Clay Road. Classes moved to the new campus in January 1984, at which point the facility was renovated to house Hewitt-Trussville Middle School. 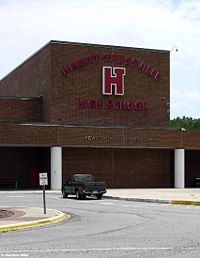 The new HTHS campus was designed by Adams/Peacher/Keeton/Cosby, Inc. with Moore Engineering & Construction serving as the general contractor. In 1996 the large, illuminated signage visible from I-59 was added to the southern facade. The front wing contained the gymnasium, auditorium, cafeteria, band room and administrative offices. The rear wing contained academic classrooms with the five hallways being distinguished by color (the red, orange, green, yellow & gray). The interior featured a pair of outdoor courtyards.

During the late 1980s and 1990s, HTHS struggled to accommodate a rapidly-growing student population from the Trussville, Clay, and Chalkville areas. By 1995, HTHS enrolled over 1,500 students in only three grades and was the sixth largest high school in the state of Alabama. The Jefferson County Board of Education agreed to construct a new high school that would serve students from Clay and Chalkville, reducing the HTHS student population by about 40%. Although overcrowding was temporary resolved with the construction of Clay-Chalkville High School in 1996, the continued rapid growth within Trussville resulted in the need for a new building, which opened in October 2008. The existing school was then converted into Hewitt-Trussville Middle School, which now occupies the building. 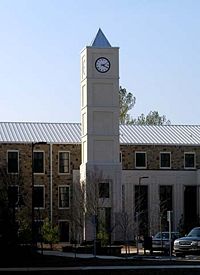 The current HTHS building is located on a 127-acre site on Husky Parkway between Trussville-Clay Road and Deerfoot Parkway, across I-59 from the previous facility. The school is able to accommodate about 1,600 students with room to grow to 2,400 students in the future. It includes a fine arts center, auditorium, field house and multiple athletic fields.

The final design for the school was approved by the Trussville Board of Education in September 2006. On Tuesday, November 14, 2006, the Trussville City Council rezoned the parcels at 5601 and 5555 Trussville-Clay Road from agricultural to institutional use to allow for the construction of the new building. The school was designed by Davis Architects and encompasses 285,000-square feet. Its design includes white columns and a clock tower, and at a final cost of $70 million, the school was the most expensive high school ever built in Alabama upon its opening in October 2008. 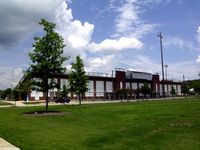 HTHS competes in AHSAA Class 7A athletics. It fields teams in the following girls' and boys' sports:

Jack Wood Stadium, adjacent to the building at 301 Parkway Drive, was used until 2013 for football games and track and field events, as well as annual commencement exercises. In 2014 a new stadium was opened on Husky Parkway, and the stadium has been demolished as part of the construction of Cahaba Elementary School. Current facilities include the HTHS gymnasium, baseball stadium, softball field, soccer field and Hewitt-Trussville stadium.

Prior to the creation of the new class 7A, HTHS competed at the 6A level, where it has won six AHSAA state championships:

HTHS sponsors a variety of student activities, including many nationally-affiliated clubs and organizations. The following is a list of many of these

The of Hewitt-Trussville is sung to the tune of God of Our Fathers, an English hymn. The lyrics are:

Dear Hewitt-Trussville, proudly now we stand
For the finest high school in our noble land.
Our hearts beat high with pride at Hewitt's name,
And cherish too her glory and her fame.