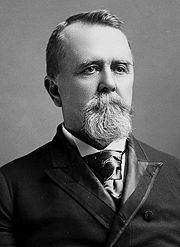 Hilary Abner Herbert (born March 12, 1834 in Laurensville, South Carolina; died March 6, 1919 in Tampa, Florida) was Secretary of the Navy under President Grover Cleveland and represented the 2nd Congressional District of Alabama from 1877 to 1893.

Herbert's family moved to Greenville, in Butler County, Alabama in 1846, in part because they perceived less risk of a slave insurrection in rural Alabama. He was educated at the University of Alabama and the University of Virginia. He was first admitted to the bar in South Carolina in 1857 and practiced back home in Greenville until 1861, when he entered the Confederate Army as a 2nd Lieutenant. He captained the Greenville Guards and, during the war, was promoted to colonel in the 8th Regiment, Alabama Infantry. He was wounded at the Battle of the Wilderness in northern Virginia on May 6, 1864.

After the war, Herbert settled in Greenville, Butler County and practiced law there until moving to Montgomery in 1872. He was elected to Congress in 1877 and served eight terms. He chaired the Committee on Naval Affairs and helped secure appropriations that revived the United States Navy. He took the floor in 1892 to oppose funding paleontology research through the United States Geological Survey, holding up a report by Othniel Marsh on toothed bird fossils and shouting "Birds with teeth! That's where your hard-earned money goes, folks—on some professor's silly birds with teeth."

President Cleveland appointed Herbert as Secretary of the Navy in 1893 and helped secure support for expansion despite an economic depression. The enlarged Navy exercised its powers in the Spanish-American War.

After his retirement in 1897, Herbert practiced in Washington. He authored a 1912 history entitled The Abolition Crusade and Its Consequences in which he sought to explain the Southern rationale for secession and to document mistakes made by both sides in seeking to uphold the US Constitution. Herbert, a widower, died in 1919 and is buried at Oakwood Cemetery in Montgomery. The destroyer USS Herbert (DD-160), launched in May 1919, was named in his honor.