This article is about the building used form 1983 to 2013. For the current facility, see Hill Student Center. 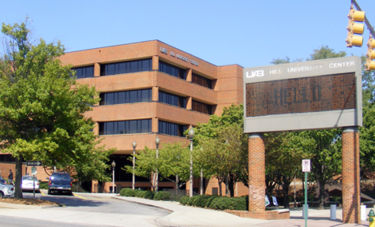 The S. Richardson Hill University Center (HUC, originally the University Center) was the home of student services and activities on the UAB campus from 1983 to 2013. It occupied the site of the present Hill Student Center, on the block between 7th Avenue South and University Boulevard and between 14th and 15th Street South.

Ground was broken for the $8.8 million building in 1980 and it opened its doors on October 10, 1983. The 5-story modernist brick-clad structure was designed by Blondheim, Williams & Golson, Architects of Montgomery and built by the B. H. Harmon Construction Co. of Chambers County.

The building was named for former UAB President S. Richardson Hill on May 17, 1991.

The 1983 building was demolished in 2013 to make way for construction of a new $35 million Hill Student Center. Also lost during construction was a row of magnolia trees planted between the sidewalk and the curb by the owner of a store that used to be located at 7th Avenue South and 14th Street. The owner's daughter kept in contact with former UAB Campus Services director Tim Sullivan regarding the condition of the trees.