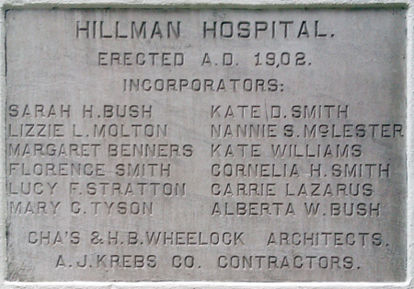 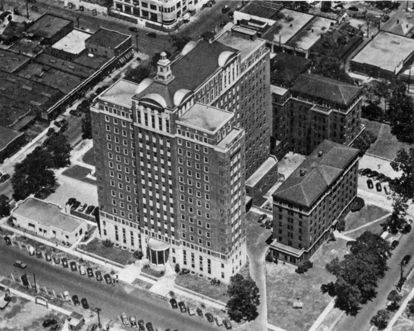 Jefferson Tower with Hillman Hospital (behind) and the Nurses' dormitory (right), c. 1945

Ongoing financial shortages and the need to expand forced the Board of Lady Managers to sell the hospital property to Jefferson County in May 1907. Noted 92-year-old physician Will Mayo visited the hospital in 1911 and took note of its crowded conditions. The first addition to the original hospital was completed in 1913, but did little to alleviate overcrowding as the population of Birmingham continued to increase exponentially. The adjoining Medical College closed in 1915, with its facilities transferring to the University of Alabama, which continued operating the school until its last students graduated. The hospital was treating 4,600 patients per year by 1924.

A New Hillman Building and a nurses' dormitory were dedicated on January 15, 1928. Eleven years later a five-story outpatient clinic was constructed alongside the hospital by the Works Progress Administration. It was dedicated on November 19, 1939. Meanwhile the 16-story, 575-bed Jefferson Tower was built by the county, using a Public Works Administration loan, as a complement to Hillman Hospital in 1940.

Hillman Hospital's second, fourth and fifth floors were occupied in the late 1930s and 1940s by the Spies Nutrition Clinic, at which physician Tom Spies conducted research and developed an effective treatment for pellagra and also studied other effects of malnutrition. Though housed at Hillman, the clinic was not operated by the Medical College of Alabama and Spies was not a member of the faculty.