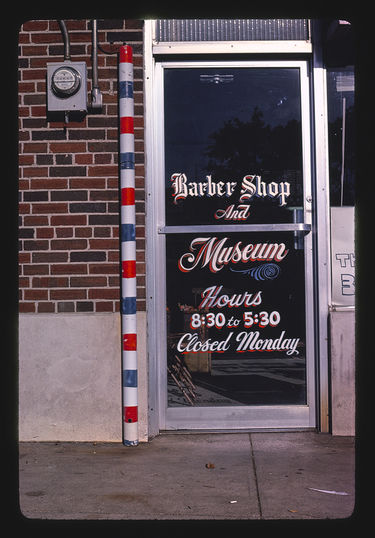 Door of the Hippodrome Barber Shop in 1980. Photo by John Margolies

The space has been occupied by a barber shop since 1904. When long-time proprieter Vincent Oliver began working there in 1966 it was known as Fowler's Barber Shop. After he bought it in 1967 he called it the Varsity Barber Shop for a while before settling on "Hippodrome", named for the New York City theater where Harry Houdini performed.

Oliver has decorated the shop with layers of memorabilia, including old bottles, lunchboxes, posters and photographs. There was an old AM tube radio, but no telephone. Haircuts were given on a walk-in basis only; Tuesday through Friday from 8:30 AM to 4:30 PM. Since early 2014 Oliver no longer opened on Saturday. The shop closed in 2018 with Oliver's death.

Musician Dan Sartain took up the lease on the shop with the intention to preserve it's character. He had painter Paul Cordes Wilm add a halo and wings above Oliver's name on the window, but later removed the name at his family's request. After taking on Bud Genry as lead barber, he changed the name of the shop to Genry's Barber Shop.