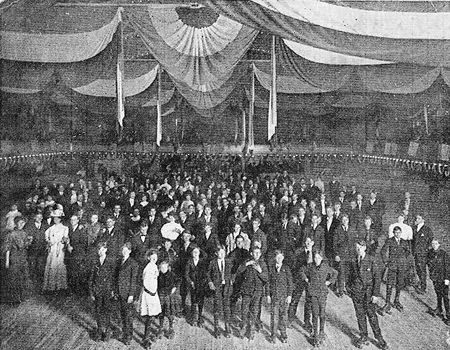 Interior of the Hippodrome, from a postcard mailed in 1907

The Hippodrome Theater or Hippodrome Skating Auditorium, later the Orpheum Theater, was a Vaudeville house and skating rink located on the southwest corner of 17th Street and 3rd Avenue North, diagonally opposite the Bijou Theater, in the 1900s.

On August 5, 1907 the Hippodrome was the venue for a public meeting of the Commercial Club of Birmingham during which Governor B. B. Comer was lobbied to sign the Smyer and King "Greater Birmingham" bills which had just passed in the Alabama State Legislature.

In 1912 the theater, managed by Martin Seamon, was listed as seating 1,200 people and offering two evening Vaudeville performances at 7:30 and 9:00 PM for 20 cents and a daily matinee at 2:30 PM for 10 cents. The stage was 70 feet wide and 38 feet deep with the curtain 8 feet behind the footlights. The rigging loft was 50 feet tall with the fly gallery at 25 feet and a 4-foot space below the stage. That year Jake Wells hired Richmond, Virginia-based architect C. K. Howell to design a $10,000 renovation for the theater.

In February 1916, as the roller-skating fad returned in force, owner J. H. Edmondson decided to pull out the seats, lay a new leveled Maple floor, and buy 1,000 pairs of skates to rent to customers. The new Hippodrome Rooler Skating Rink [sic] opened on April 2.