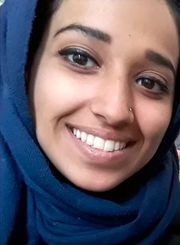 Hoda Ahmed Muthana (born October 28, 1994 in Hackensack, New Jersey) is an expatriate former member of the Islamic State of Iraq and al-Sham (ISIS), a militant group which was engaged in violent religiously-motivated conflict in Iraq and Syria.

Muthana is the youngest of five children born to Ahmed Ali Muthana, a former First Secretary at the Permanent Mission of the Republic of Yemen to the United Nations in New York, New York. On September 1, 1994, Ahmed Muthana's position at the Permanent Mission was terminated as a result of the First Yemeni Civil War. He and his wife had already decided to immigrate, and applied for permanent resident status for themselves and their four older children. Hoda, having been born after he left his diplomatic post, was believed to have been a U.S. citizen by birth. She received a U.S. passport on that basis in 2004.

The Muthanas moved to Hoover and Hoda graduated from Hoover High School in 2013. She briefly attended business classes at UAB until leaving the country in November 2014. She was raised under close discipline and had few close friends at school, or even in the Muslim community centered around the Hoover Islamic Center.

In 2012 Muthana became interested in stricter versions of Islam through sermons on YouTube. She assumed more modest dress and filled notebooks with transcriptions of the Quran, pleasing her parents. At the same time, she adopted the persona of a conservative and even militant Islamist on social media sites like Twitter. Through the internet, she interacted with adherents of the "Islamic State" movement, which extols the formation of a new caliphate to render all other national governments invalid. She further isolated herself from her community and aligned herself with ISIS ideology.

Muthana received help from ISIS contacts in formulating plans to move to Syria and join the movement. She renewed her expired passport, then immediately withdrew from UAB after enrolling for Spring classes in order to receive a refund check. In November 2014, while her father was in Washington D.C., she claimed to be going on a field trip to Atlanta in order to maintain her grades. She contacted her sister that evening to say she had boarded the "wrong bus" and would have to spend the night. Her next call came from Turkey, when she informed her sister of her true intentions.

Muthana's father immediately notified the FBI of his daughter's actions. He was able to speak to her by telephone from Syria the next day, and Hoda told him that she would be working with widows and orphans as a missionary, not as a fighter. A month later, she contacted her father again to ask for money to flee to Turkey as a refugee because she was being pressured to marry against her will. He realized that the request was dishonest, however, and sent no money. She was, she later acknowledged, pleased to marry in the Islamic State without her father's blessing. On December 20 in Raqqa, she married Suhan Rahman, a recruit from Melbourne, Austrialia who took the name Abu Jihad al-Australi. Rahman was reportedly killed by Jordanian air strikes against ISIS in Syria on March 17, 2015. Shortly after her husband's death, Muthana appealed for violence against Americans on Twitter and publicly burned her passport. In January 2016 the U.S. State Department sent Muthana a letter, at her Hoover address, stating that the United Nations' Host Country Affairs Section had not been notified of Ahmed Muthana's loss of diplomatic position until February 1995, and that therefore the United States had continued to consider him and his family as protected by diplomatic immunity, and therefore not "under the jurisdiction of the United States," as required for birthright citizenship guaranteed in the 14th amendment. The letter stated that she was entitled to a hearing to present evidence of an unlawful determination.

She remarried, to a Tunisian fighter, and gave birth to a son, named Adam, in late 2017. Her second husband was killed in action in Mosul. She was married again to a Syrian-born member of the group, but as the Islamic State's territorial losses mounted, she began making plans to escape. In late 2018 she fled with her infant son from the village of Susa with a group of other exiles from ISIS. They spent two nights in the desert before being captured by Kurdish forces and brought to the al-Hawl refugee camp in northern Syria. She is the only American among the 1,500 or so foreign women and children held there.

In an interview for The Guardian in February 2019, Muthana expressed regret for her previous support for ISIS, saying, "I was really young and ignorant and I was 19 when I decided to leave." She has expressed hopes to return to the United States with her son, though she recognizes that she would likely be imprisoned. U.S. Secretary of State Mike Pompeo issued a statement saying that Muthana, "is not a U.S. citizen and will not be admitted into the United States. She does not have any legal basis, no valid U.S. passport, no right to a passport nor any visa to travel to the United States." Her family's attorney disputed that statement. Her father filed a lawsuit seeking to establish her citizenship rights.

Judge Reggie Walton of the United States District Court for the District of Columbia ruled in November 2019 that there was insufficient evidence to establish Muthan's United States citizenship. He also ruled that if Muthana's father provided financial support to Hoda or Adam, that he could be charged with supporting terrorism.

In 2021 Hoda's sister, Arwa Muthana, and her husband, James Bradley, were arrested in Newark, New Jersey and charged with attempting and conspiring to provide material support to a designated foreign terrorist organization. Prosecutors claim that the couple intended to travel to Yemen by cargo ship and to join ISIS when they arrived in the Middle East. The Muthanas home in Hoover was searched again by federal officials as part of that investigation.