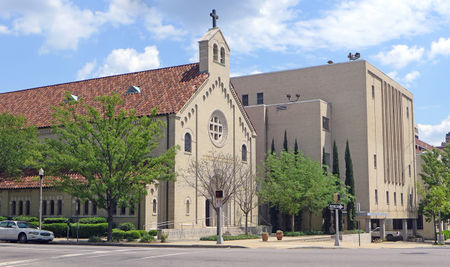 The church dates back to the founding of Holy Trinity Greek Orthodox Church in 1906. A second congregation, the Holy Cross Greek Orthodox Church, was organized in 1933. The two merged in 1953 to form the present cathedral church. The current cathedral building was built in 1949 and a Family Life Center adjacent to the cathedral was added later. According to a plaque on the outside of the Family Life Center, it was dedicated to the memory of Rev. Fr. Emanuel Vasilakis who died in 1995.

The church was designed by Birmingham architect George P. Turner. Unlike many American Greek Orthodox churches its floor plan is a long Latin cross, rather than a more compact Greek cross. This was the required by the dimensions of the lot which originally housed a Methodist church.

In 1972 the Cathedral's Ladies' Philoptochos Society began hosting an annual "Birmingham Greek Festival" to showcase traditional cuisine and culture and to raise funds for local charities.