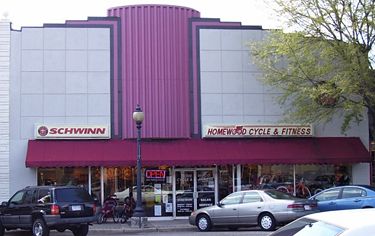 Homewood Cycle and Fitness was located in the old Homewood Theatre building at 2834 18th Street South in downtown Homewood. Its primary business was selling bicycles and related equipment.

In the early 2000s, the business was purchased by the Cahaba Cycles chain, but continued to operate under the Homewood Cycle name until June 2011, when the building's facade was renovated. At that time, the name was changed to Cahaba Cycles. Jonathan Bourque was manager at the time.

The building itself is owned by Walter Busenlehner, who also owns Homewood Toy and Hobby Shop next door.