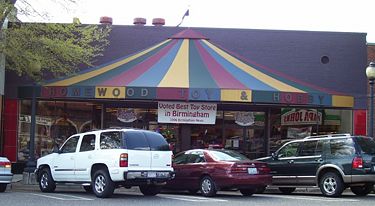 The Homewood Toy & Hobby Shop is located at 2830 18th Street South in downtown Homewood. The hobby portion specializes in model kits, model trains, and remote control airplanes while the toy portion has a large doll collection on display. The business and the building are owned by Walter Busenlehner.

The store was founded as Homewood Cycle & Hobby Shop around 1952 at 2738 18th Street South. After Homewood Theatre closed around 1963, the store moved to that building. For a time, the hobby portion expanded into part of the building to the south of the old theater. Then, around 1975, the hobby and toy portion of the business began separating from the bicycle portion. The split became official around 1980, with Homewood Cycle Shop continuing to occupy the old Homewood Theatre while Homewood Toy & Hobby moved to its current location, the building adjacent to the north, but retained the store's original phone number.

In the 1980s, the store sold comic books and had a large selection of role-playing games and related items.