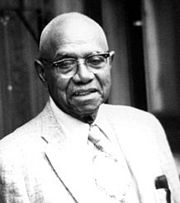 Hosea Hudson (born April 12, 1898, in Wilkes County, Georgia; died 1988 in Gainesville, Florida) was a militant African-American labor organizer and social activist active in Birmingham as a member of the Communist Party in the 1930s and 1940s.

Hudson grew up as a sharecropper, growing cotton in Georgia's Black Belt. He married Lucy Goosby when he was 19 years old and had one son. A boll-weevil infestation in 1922 drove him to Atlanta to look for work. He took a job with the railroads briefly, but soon moved his family to Birmingham and became an iron molder for the Nashville, Chattanooga and St Louis Railroad. He sang bass as a member of the L & N Quartet, one of the first Black vocal groups to be broadcast on local radio.

Hudson took a job with Stockham Valves and Fittings in 1924. In the early 1930s, while still working there, he attended a meeting organized by Al Murphy, another black worker who was a member of the Communist Party USA and who had been involved in defending the Scottsboro boys. Hudson joined the party and was assigned as unit organizer for his plant. Not long afterwards he was fired and blacklisted. He used assumed names to find odd jobs through the Depression and worked with the party to organize unemployed workers to negotiate with relief agencies and landlords.

Hudson traveled to New York City in 1934 for a 10-week CPUSA training program. He remained in New York for three years, during which time he learned to read and write while studying Marxism. He returned to Birmingham in 1937 and founded the Right to Vote Club in order to educate black citizens about their voting rights and coordinate efforts to defeat practices set up by poll workers to disenfranchise them. The club succeeded in quadrupling the number black voters in Jefferson County between 1938 and 1940.

As a Works Progress Administration laborer, Hudson joined the Workers Alliance, a national organization of WPA workers. His influence helped broaden the scope of that group to include more minorities. He served two years as vice-president of the Birmingham and Jefferson County locals.

During World War II Hudson found employment again in a foundry and joined the United Steelworkers of America, leading successful efforts to unionize his plant. He was subsequently elected president of USW Local 2815 and oversaw significant improvements in wages and working conditions. As local president he served as a delegate to the Birmingham Industrial Union Council and was vice president of the Alabama People's Educational Association, an affiliate of the Communist Political Association.

Hudson and his wife divorced in 1946. He was fired and again blacklisted for his Communist affiliations in 1947. He was also forced out of his union membership. Again using assumed names he moved back to Atlanta, then to New York and Atlantic City where he worked as a janitor and renewed his CPUSA membership and became an active community organizer again.

Hudson was honored by the City of Birmingham on February 26, 1980 when Mayor Richard Arrington, Jr proclaimed "Hosea Hudson Day" and gave him a key to the city. He assisted author Nell Irvin Painter in the preparation of a biography which was published in 1981 as The Narrative of Hosea Hudson: The Life and Times of a Black Radical.