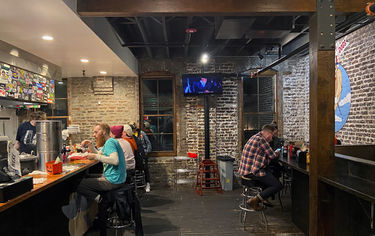 VIew of Hot Diggity Dogs on its final evening

Hot Diggity Dogs was a gourmet hot dog shop located at 430 41st Street South, entered from the stairs in 5th Avenue South, across from Avondale Park. It was opened by former Bottletree Cafe chef Tom Bagby in July 2016.

Bagby named the business for a former hot dog stand across from the Wheel-A-Wave Skatepark on West Valley Avenue. The business also served as a "cover" for the adjoining speakeasy, The Marble Ring, which was entered via a phone booth at the back of the hot dog stand.

After a couple of years, Bagby added sandwiches, burgers and other items to the restaurant's menu. The business closed on January 18, 2020.