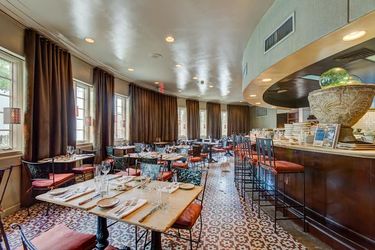 Hot and Hot Fish Club is a restaurant

The restaurant was opened in 1995 by Chris and Idie Hastings at 2180 11th Court South, in the former Caddell's Restaurant space on the lower level of Highland Plaza shopping center. The dining area featured a long chef's counter with a view of the kitchen. A "Harvest Room" accommodated groups of up to 35.

Chris was the 2012 winner and a 2008, 2010 and 2011 finalist for the James Beard Foundation's "Best Chef in the South" award. The Hastings published The Hot and Hot Fish Club Cookbook: A Celebration of food, family & Traditions in October 2009.

In 2019 the restaurant made plans to relocate ahead of a planned redevelopment of Highland Plaza. Hastings took over the former Cantina space in the Martin Biscuit Building at Pepper Place, near his other restaurant, Ovenbird.

Renovations for the new restaurant were designed by Rob Walker Architects and Liz Hand Woods interior design and carried out by Rives Construction Company. Alabama Sawyer constructed furniture for the new location.