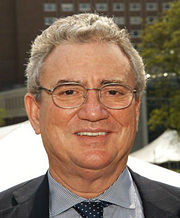 Howell Hiram Raines (born February 5, 1943 in Birmingham) was Executive Editor of The New York Times from September 5, 2001 until his resignation on June 5, 2003 following the Jayson Blair scandal. Before that he headed the editorial page staff for eight years. In 2008, he became a contributing editor for Condé Nast Portfolio, writing the magazine's media column.

Raines was the third child born to Raines Brothers Store Fixture Company partner Wattie S. Raines & the former Bertha Walker. His brother and sister were 10 and 12 years older, respectively. The family had a three-bedroom house in the Bush Hills neighborhood and vacationed at a cottage near Panama City Beach. Raines played baseball and was popular in school, winning the vice-presidency of his senior class. He graduated in 1961 and entered college nearby at Birmingham-Southern. After graduating he worked some for his father, but soon applied for a reporter position at the Birmingham Post-Herald and began his career in professional journalism. Later that year he switched to the newsroom at WBRC-TV where he wrote news copy and documentaries.

Having joined the National Guard to avoid the draft, Raines was assigned to active duty in 1967 for six months. He enrolled as a graduate student in journalism at the University of Alabama and began working part time for the Tuscaloosa News. While at Alabama he met Susan Woodley, a fellow journalist, whom he married in March 1969. The couple moved back to Birmingham and Raines began working seriously on a novel (The Death of Bluenose Trogden). Raines took a plant foreman job at his father's business to earn more money once the family started to grow, but only lasted part of a year before finding work at The Birmingham News. Before long he was offered a better job by the Atlanta Constitution and the family relocated to Atlanta.

Raines' affiliation with the New York Times began in 1978, when he joined as a national correspondent based in Atlanta. By 1979, Raines was the bureau chief in Atlanta, a position he remained in until 1981, when he became a national political correspondent. By the next year, Raines had been promoted to a White House correspondent for The Times. His ascent within management continued in 1985, when he became deputy Washington editor. In 1987, Raines transferred to London and worked as the newspaper's London bureau chief. The next year, he returned to Washington D.C. to become the Washington bureau chief. In 1992, he was awarded the Pulitzer Prize for Feature Writing. His longest lasting assignment within The Times began in 1993, when he left Washington for New York to become the paper's editorial page editor. He was appointed to Executive Editor in September 2001.

Raines was lauded by many for instituting a program to increase diversity and to revive advocacy journalism. Although there was a period in the early unfolding of the Enron story regarding that energy company's corrupt practices when the Times had to play 'catch up' to the Wall Street Journal, the Times did later develop some hard-hitting articles on that subject, a highly praised accomplishment due in part to Raines' insistence on aggressive investigations. Widely cited as a "hard-charging" Executive Editor, Raines was known for his policy of "flooding the zone"- using all The Times' available resources to cover important stories.

Widely known for his liberal politics, Raines often alienated many on The Times' staff and angered media watchers with his perceived inability to keep his politics off the press. Raines faced particularly harsh criticism for the thirty-two stories published by The Times on the Augusta National Golf Club, which hosts the Masters Tournament, and their policy of not admitting women as members, nearly twice the number of articles published on the Club as in comparable newspapers. Also, he may have spiked opinion columns on the sports page that expressed dissent from his own position on that subject.

The Jayson Blair scandal forced his resignation after 20 months as Executive Editor. In a statement published in The Times, Raines apologized for his part in the scandal, admitting that Blair was promoted at least twice because of his race and the paper's renewed emphasis on diversity had encouraged editors to overlook Blair's fabrications.

Raines took an in-depth look at his tenure as Executive Editor in "My Times", published in the Atlantic Monthly, and again in his memoir coming out this May, "The One that Got Away." In it, Raines gives scant attention to The Times, Judith Miller or Jayson Blair, focusing instead on his idyllic life post-Times.

In addition to his work as a journalist, Raines has published several books; "My Soul Is Rested" and "Whiskey Man" in 1977 and "Fly Fishing Through The Midlife Crisis" in 1993. He contributed to "Campaign Money", published in 1976.