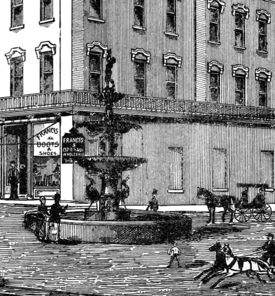 Hudgin's Fountain in its original location, outside the Florence Hotel. 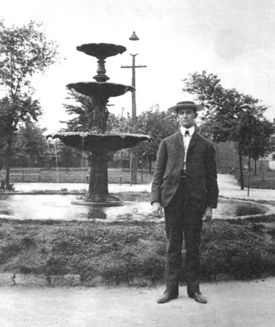 The large fountain was first erected at the intersection on 19th Street and 2nd Avenue North, just outside the Florence Hotel and the offices of The Birmingham Age, in the mid 1880s.

Within a few years, and following Hudgins' death, the cast-iron fountain was widely considered an "eyesore" responsible for muddying that intersection. In December 1891 it was removed to Capitol Park (or "20th Street Park") by city crews. When a bandstand was erected in the park in 1895, crews relocated the park's two electric lights closer to the fountain. In 1899 the Parks Committee of the Birmingham Board of Aldermen had the fountain, "changed into a flower bed," at a very small cost to the city.

Long-time resident John Rosestihl recalled the fountain in 1947 as having, "cranes at the base and a disc above them from which water trickled." The fountain was later dismantled and sold as scrap by the city.