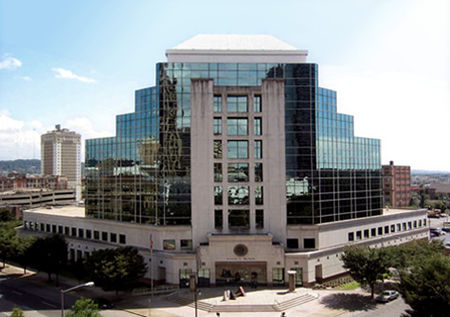 The Hugo L. Black United States Federal Courthouse is a federal courthouse building constructed in 1987 for the United States District Court for the Northern District of Alabama. The building occupies Block 62 of downtown Birmingham, facing the intersection of 5th Avenue North and 18th Street from the southwest.

The nine-story, 200,000 square foot building was designed by KPS Group in a postmodern style contrasting a classically-inspired limestone base with a glass curtain wall above. The sides step up to the corner which faces a small triangular plaza and is capped by a hip-roofed mechanical penthouse. The building houses seven primary courtrooms, a larger ceremonial courtroom, and four magistrate courtroom. It incorporates secured underground parking and chambers and offices for judges, clerks and other staff members. Brasfield & Gorrie was the general contractor for the project.

In November 1987 President Ronald Reagan signed a law naming the courthouse in memory of former Supreme Court Judstice Hugo Black. In July 1988, roughly a year after the courthouse opened, it was formally dedicated. Black's son, Hugo Jr joined U.S. Senator Howell Heflin and U.S. Representative Ben Erdreich at the ceremony. Also present was Erdreich's father-in-law and Black's first law clerk, Buddy Cooper. A bust of Black, sculpted by his grandson John, was installed later in the rotunda of the courthouse. A selection of Justice Black's legal opinions are displayed on the walls alongside the words of the first amendment to the U.S. Constitution.

A granite sculpture, "Red Mountains" by Dimitri Hadzi adorned the entrance plaza from 1991 to 2012. It was removed for renovations and later moved to another location on the grounds that it presented a threat to security at the entrance.