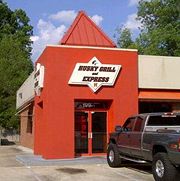 Husky Grill and Express was a restaurant at 199 Beechnut Street at Chalkville Road in Trussville. The home-style fare, including steaks and cheeseburgers, was delivered throughout Trussville, Clay and Grayson Valley. Owner John Bruce opened the establishment in February 2011 and closed it in September 2012. Husky Grill employee Preston Kelly went on to open Trios in the former Tomatapie Pizzeria space in the 2nd phase of Colonial Promenade at Trussville on Trussville Crossings Boulevard and expanded the menu to include pizzas, meat-and-three meals, seafood and fajitas.