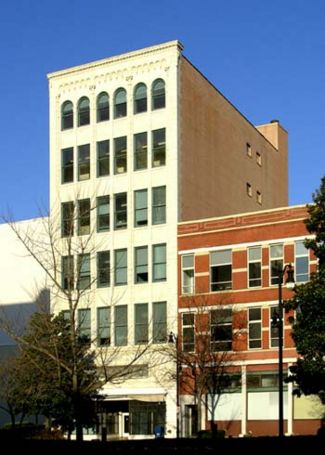 The Ideal Building is the former location of the Ideal Department Store at 111 19th Street North in downtown Birmingham. The 6-story, 26,677 square-foot building was constructed by the Aland family in 1929 for their 20-year-old business.

The narrow building was designed by architect D. O. Whilldin. It is clad in white terra-cotta with thin spiral columns dividing the facade into three bays. Its lobby is clad in Italian marble and its cornice is supported by a row of corbeled arches.

The store was renamed "New Ideal" and relocated to 2nd Avenue North in 1935. The 1928 building later became the home of Tillman-Levenson, and later Standard Furniture. It was added to the National Register of Historic Places on June 2, 1985. It underwent renovations in 1982 and 1986. In 1995 developer Joseph McClure converted it into a multi-tenant office building.

In the mid 2000s, Atlanta developer Jeff Notrica purchased the Ideal Building for $1.5 million. In September 2009 First Commercial Bank foreclosed on the building and auctioned it off.

In 2015 Atlanta developer Travis E. Taylor bought the building from Joe Zhang for $760,000 and began planning to redevelop it with 9-10 residential units on the upper floors and a retail tenant on the ground floor. When the project was announced he was negotiating with Dunkin' Donuts for the ground-floor lease. Taylor also said he was exploring the possibility of adding 2-4 additional floors to the structure. Walker Architects was commissioned to do the design work, and Surface Design Solutions was general contractor.

Larry Lemak and Matthew Lemak purchased the building in 2020 for $4.5 million.