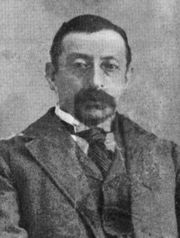 Isaac R. Hochstadter (born July 1, 1852 in Fayette, Mississippi; died June 19, 1910) was owner of the Iron City Exchange saloon and a wholesaler of whisky and billiards equipment.

Hochstader was the son of German immigrants Charles and Rosa Rubel Hochstadter who married in 1849 in Jefferson County, Mississippi. The family moved to Philadelphia, Mississippi until coming to the infant city of Birmingham in 1873. Isaac graduated from high school in Philadelphia in 1868 and was engaged in a mercantile store with a member of his mother's family in Okolona, Mississippi until 1874. He first entered into business in Birmingham in 1875 as a partner of Solomon Wise. He married Carrie Lebolt of Dayton, Ohio on September 19, 1883 before going out on his own in 1884. His company maintained a warehouse at 1808 1st Avenue North. The business was represented with a float bearing a pyramid of whisky barrels and champagne casks in the city's 1886 Mardi Gras parade.

Hochstadter shared a house on the west side of the 600 block of 18th Street North with Joseph Hochstadter, proprietor of the Dude Saloon; M. W. Hochstadter, partner in City Shoe Store; and his widowed mother. He was a member of Birmingham Fraternal Lodge No. 384, Masons of the Grand Lodge of Alabama as well as the Knights of Pythias and International Order of Foresters. He founded the Sunday School at Temple Emanu-El in 1883 and served as the congregation's president from 1885 to 1886 and from 1891 to 1892. He was also a founder of the Phoenix Club and a long-time volunteer firefighter who went on to serve as a captain in the Birmingham Fire Department.

Hochstadter was elected to the Birmingham Board of Aldermen in 1875 during William Morris' first administration. He also served during A. O. Lane's second and third terms. In that capacity he was among the group welcoming President Benjamin Harrison to Birmingham on April 16, 1891. He served as a director of the Alabama National Bank and the Ice Company and invested in several land development ventures.