It's Nice to Have You in Birmingham 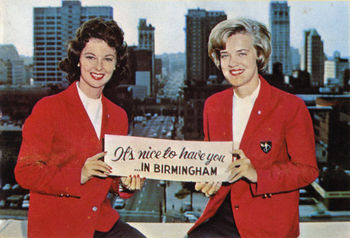 Two of Liberty National Life Insurance Company's "Liberty Bells" pose on the roof of the Liberty National Building with an "It's Nice to Have You in Birmingham" sign for a promotional postcard folder, c. 1963 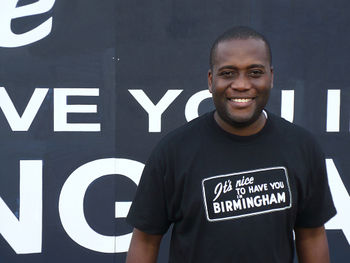 Additionally, the slogan appeared on bumper stickers, buttons, novelty license plates and other memorabilia. A "billboard" truck bearing the slogan was used in parades and cruised around Legion Field during events. Birmingham businesses, such as Don Drennen, used the slogan on their own promotional items, as well. The Birmingham Police Department even included the slogan on a leaflet of traffic regulations given in lieu of tickets to minor traffic offenders in 1962. The leaflet was signed by Commissioner of Public Safety Bull Connor.

The irony implicit in the slogan being used by a city that was especially unwelcoming to African-Americans has been noted in many accounts of the Civil Rights Movement. It was pointed out contemporaneously in a 1958 radio interview with Frank Dukes on WENN-AM, in a 1963 speech by Fred Shuttlesworth at St James Baptist Church, and in an article by Shuttlesworth entitled "Birmingham Shall be Free Some Day" which appeared in the Freedomways political journal in early 1964. A 1970 Newsweek article quoted a satirical reworking of the phrase used by African Americans in reference to the city's series of unsolved bombings: "It's Nice to Bomb You in Havingham".

Welcome signs featuring the slogan are visible at the entrance to Boutwell Auditorium in the 1976 feature film "Stay Hungry".

The slogan was revived in 2007 by "The Terminal" publisher André Natta, for a line of t-shirts and also for series of video interviews with Birminghamians. Inspired by those t-shirts, the Friends of Rickwood used the slogan, along with an illustration of Vulcan, on a vintage style mural created by Skidmore Sign Co. for the outfield wall of Rickwood Field for the 2010 Rickwood Classic. Another t-shirt design using the phrase was sold by A Bryan Photography in 2011.

In January 2013 a line of screen printed t-shirts with the slogan were marketed by Yellowhammer Creative at craft shows and pop-up shops. A large "It's Nice to Have You in Birmingham" mural was commissioned by the Woodlawn Foundation from the Magic City Mural Collective for a wall facing a parking lot at 55th Place and 1st Avenue South in Woodlawn. That mural was removed during construction of the James Rushton Early Learning and Family Success Center. Project Corporate Leadership sponsored a replacement, on the south side of Cyclorama facing the same parking lot, which was completed in 2018 by Rob Clifton and Moses Pressnell of Blank Space Bham with participation from community members.

In 2014, another mural featuring the same slogan over a skyline illustration was approved by the Birmingham Design Review Committee for the south wall of John's City Diner.

The Mural Collective was commissioned for another large-scale version of the slogan on the wall above a shed roof at Trim Tab Brewing. The commission was supported with donations collected through Kickstarter.

Tynes Signs painted a version of the phrase on the brushed aluminum bar front at 5 Point Oyster Bar & Public House. Another version can be found inside the Trader Joe's grocery store at The Summit.

In early 2015 LIV Apartment Partners announced plans to display the slogan along with a large-scale depiction of the Birmingham Terminal Station on the south face of the Jemison Flats parking deck, facing the new Birmingham Intermodal Facility. Cohen Carnaggio Reynolds prepared design drawings that were approved by the Birmingham Design Review Committee in March.

Shortly after that approval, in April 2015, Yellowhammer Creative applied for state and federal trademark protection for the phrase when used in graphic displays such as posters and murals, and for a stylized rendering of the phrase on articles of clothing. A state trademark filing, for the design mark, "used on t-shirts and other clothing items, on poster printws [sic] and artistic projects, and in the provision of design and printing services." was issued in August for a five-year term.

An attorney representing the branding company contacted LIV Apartment Partners in May claiming that "Yellowhammer Creative has a proprietary interest and trademark rights in this mark that are infringed by its unlicensed use." The letter went on to explain that, "Yellowhammer's t-shirts, posters and murals featuring this phrase have made what was previously a mere footnote in the City's history into an iconic part of the Birmingham zeitgeist." This was accompanied by a proposed "limited, nontransferable and non-exclusive" licensing contract for a fee of $63,000 to be paid over ten years.

After the company's efforts to register the mark through the U.S. Patent and Trademark Office became public, on I Believe in Birmingham's Facebook page, Yellowhammer Creative was subjected to a flurry of criticism. In response, YHC's co-founders, Brandon Watkins and Brett Forsyth, told al.com reporter Jeremy Gray that the application for trademark protection was not intended to benefit them financially, but to protect the phrase from being "watered down" by overuse. Several formal objections were filed to the Trademark Trial and Appeal Board. The objection filed by artist Erin Melaney Bodden was the first to advance to the discovery phase. Other objectors on file include LIV Apartment Partners, REV Birmingham and the Birmingham Business Alliance.

Meanwhile, Yellowhammer organized a "Town Hall" meeting at Trim Tab Brewing Company to discuss the need to protect the phrase from "exploitation". They requested that anyone speaking in opposition bring a suggested alternate plan. One suggestion that was floated by YHC at the meeting was for a non-profit foundation to be established to hold and manage the license to the phrase, and to use revenues to benefit public art projects in the city. To date, with the status of YHC's claims up in the air, no volunteers have taken steps to organize such a group.

In April 2016, Yellowhammer Creative moved to try to dismiss Birmingham Business Alliance and REV Birmingham's opposition to Yellowhammer's request for the trademark. Andrew Wheeler-Berliner, Yellowhammer's attorney, stated "Neither can reasonably say it will be damaged by the possible loss of a benefit it can only speculate might stem from actions beyond its control". In contrast, BBA's attorney stated "The Birmingham Business Alliance, an 'economic development organization focused on the economic growth and the marketing of the entire seven county Birmingham region' has used and continues to use 'It's Nice To Have You In Birmingham' to 'promote dynamic growth and to improve the quality of life in the region.'" The Trademark Trial and Appeal Board dismissed the challenges filed by REV, the BBA and Erin Bodden in December 2016, leaving on LIV Apartment Partners' challenge to be decided.