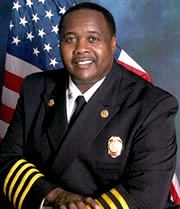 Brooks grew up in East Lake, attending Barrett Elementary School. As a teenager he worked in the pit crew for Hall of Fame drag-racer Bill Mullins, who named him "Clutch" for his ineptitude with working on automobile clutches. Brooks soon became a drag racer himself. After high school he took a job assembling airplane brakes in California. He continued to race as a hobby until 1988.

Brooks returned to Birmingham in 1982 having applied to become a firefighter. He was assigned to Birmingham Fire Station No. 19 in East Lake. After three years he was promoted to Lieutenant, then to Captain five years after that. From there he was promoted to Battalion Chief and Assistant Chief of Operations. On November 14, 2007 newly-inaugurated Mayor Larry Langford tapped Brooks to succeed Carl Harper as Chief of the city's Fire and Rescue Service.

Brooks was one of the planners of the Alabama Mutual Aid System which helps various departments work together to respond to emergencies.

Brooks was also a deacon and trustee of 16th Street Baptist Church.

Brooks suffered a fatal heart attack in May 2014. He was survived by his wife, Joyce, chair of the Birmingham Jefferson County Transit Authority, four children, and one grandchild. He is buried at Zion Memorial Gardens in Huffman.