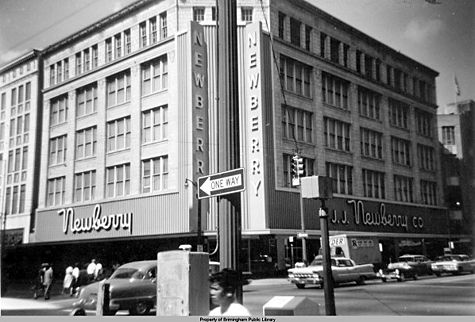 The J. J. Newberry Company was a family-owned discount department store chain founded in 1911 by John Josiah Newberry in Stroudsburg, Pennsylvania. The company's Birmingham store was located in the former Saks Building on the northwest corner of 19th Street and 2nd Avenue North.

Beginning in 1936, Newberry's occupied the building constructed in 1916 for the Louis Saks Clothiers and later used by Melancon's. It shared a small stairway with the neighboring Calder Furniture Co., entered through a narrow Roman-style portico on 2nd Avenue.

Newberry's opened a second location at Eastwood Mall in 1960.

The flagship downtown variety store was expanded and remodeled as a true department store in 1961. The $1.5 million update to the 90,000 square-foot, 6-story building was designed by Miller, Martin & Lewis in association with Edwin McCowan. The Robins Engineering Company performed the construction work. Exterior improvements included the installation of a wrap-around sign and cantilevered sidewalk cover and new vertical signs at the street corner, both backed by an epoxy-coated aluminum cladding system characterized by vertical fins. 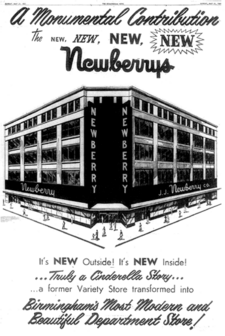 In December 1962, the store was rebranded as Britts of Birmingham, a more upscale version of Newberry's. Britts stocked merchandise purchased by its own New York buyers, but tailored to local preferences. The management placed a premium on customer service. A "Coachlight Cafeteria" was open for lunch and dinner six days a week, and became a target a desegregationalists during the 1963 Birmingham Campaign. The store, which had signed a 30-year lease on the building, reverted to the Newberry's branding in the 1970s.

Newberry's final day of business was January 26, 1995. It had been purchased to make way for the McWane Science Center's IMAX Dome Theater. The vacant building was finally demolished in 1996.