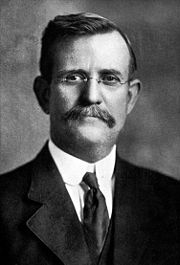 John L. Parker (born December 4, 1865 in Livingston, Sumter County) was president of the newly-reorganized Birmingham City Council which was formed from the Birmingham Board of Aldermen in 1907,

Parker arrived in Birmingham about 1889 and operated drug stores and a nursery and greenhouse in the city. He served several terms on the Board of Aldermen, and was representing the 7th Ward in 1907 when the Alabama Legislature passed a new Municipal Code which separated legislative and executive powers, giving City Councils the right to hire and fire city workers. Mayor George Ward supported the change, so long as it did not apply until the end of his term. While he was out of the country, however, the Board of Alderman took action, reconstituting themselves as a City Council under the new law, and electing Parker as president and acting Mayor in Ward's absence. His first act as president was to reassign the Council's committee memberships, leaving Ward's supporters in charge of little more than cemetery upkeep.

Ward, who had the support of the Birmingham Police Department, suspected that the sudden move was a backlash against his suppression of saloons and other dens of vice. He called a meeting of his "Board of Alderman" when he returned, and refused to allow the "City Council" to meet in City Hall as officers. Parker filed a lawsuit and won a favorable judgement in the Alabama Supreme Court, ratifying the Council's claim on control over municipal matters under the 1907 law. The victory was short-lived, however, as a change in government establishing a Birmingham City Commission went into effect in 1910.