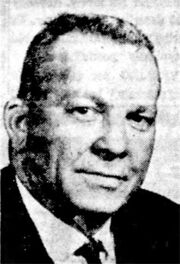 J. T. "Jabo" Waggoner Sr (born 1907; died October 19, 1992) was the Commissioner of Public Improvements on the Birmingham City Commission from 1956 until the city's form of government was changed in April 1963.

Waggoner began working for the City of Birmingham as a guard at the Birmingham City Jail. He was promoted through the ranks to general superintendent of streets and lost after a controversial recount in the 1953 Birmingham municipal election. He defeated Bull Connor in a run-off for the seat vacated by the retirement of Wade Bradley in 1956.

While serving on the Commission, Waggoner kept primarily to the task of fulfilling the streets and sanitation duties of his office. He created the Birmingham Beautification Board to recognize property owners. Though known as strong-willed and opinionated, Waggoner rarely spoke out on the prevailing tensions between segregationists and the Civil Rights Movement in the city. The commission generally voted unanimously throughout his tenure, and followed the lead of Connor, the popular arch-segregationist and Commissioner of Public Safety. In 1963 business interests united with progressives to overthrow the City Commission form of government in a play to get Connor out of office. Waggoner and his fellow Commissioners unsuccessfully challenged the legality of the referendum and only ceded their positions after a ruling by the Alabama Supreme Court.

In the 1963 Birmingham mayoral election, Waggoner ran against Lieutenant Governor Albert Boutwell, Connor and Tom King, finishing with only 4 percent of the vote. Connor went on to accept an appointment to the Alabama Public Service Commission and hired Waggoner as his assistant. He ran unsuccessfully for a seat on the Commission in the 1972 general election.

Waggoner died in 1992 and is buried at Elmwood Cemetery.