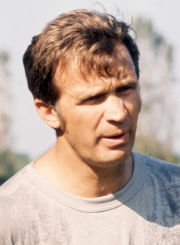 Gotta wasn't a high school football player, but his showings in pick up games earned him interest from colleges. He played tight end for the Oregon State Beavers in 1952 and for Hamilton Air Force Base from 1954 to 1956. He signed with the Cleveland Browns, but was cut from the roster. He played for the Calgary Stampeders of the Canadian Football League from 1957 to 1959, then signed with the Saskatchewan Roughriders, where he sometimes switched over to linebacker and safety. He was cut in 1964 and subsequently signed by the Montreal Alouettes.

Gotta returned to Saskatchewan in 1965 to serve as an assistant coach. He resigned after two years to work for the Ottawa Rough Riders and succeeded Frank Clair as head coach in 1970. His teams earned a 30-26 record in his four seasons, including a Grey Cup championship in 1973. He was awarded the Annis Stukus coaching trophy in 1972 and 1973.

In 1974 Gotta left the CFL to serve as head coach and general manager of the Birmingham Americans in the upstart World Football League. The team finished with a 15-5 record and won the first WFL World Bowl at Legion Field. The team folded, however, in 1975, and was reorganized under new ownership as the Birmingham Vulcans. Gotta remained general manager while Marvin Bass took over coaching duties. The team went 9-3 before the league folded midway through the season. They were crowned consensus champions without a playoff.

Gotta returned to the CFL in 1977 as head coach and general manager of the Calgary Stampeders. He stepped away from the coach's role after four seasons but remained general manager. When Jerry Williams resigned in 1981 he returned to the sideline for two more years, but was fired when the Stampeders failed to secure a playoff berth. His overall record in Calgary was 44-46-6 and he was Coach of the Year in 1978.

In 1984 Gotta began providing commentary for the CFL on CTV. A year later he returned to the field as coach of the Saskatchewan Roughriders. He went 11-22-1 in two seasons before retiring.

Gotta suffered from Alzheimer's disease. He died in June 2013 at his home in Cochrane, Alberta.