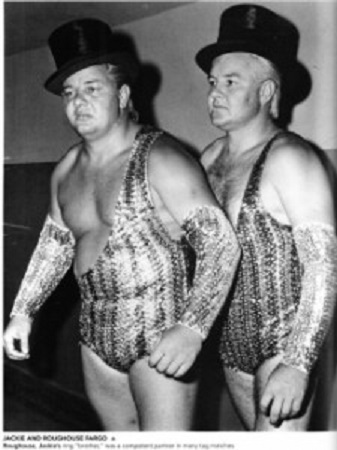 Jackie Fargo (born Henry Faggart on June 26, 1930 in Concord, North Carolina; died June 24, 2013 in China Grove, North Carolina) was one of the top wrestling stars that worked for Nick Gulas and Roy Welch.

In 1955, Jackie and Don Kalt were working in New York for promoter Toots Mondt. They both had died platinum blond hair and were very flamboyant for the times, more like Buddy Rogers than Gorgeous George. In fact, Kalt was somewhat of a protégé of Rogers. Kalt first went into New York as Don Stevens, a worked brother to Ray Stevens. Jackie was wrestling as Honeyboy Fargo. Mondt thought they would mesh well as a team, and he was proven right. Mondt gave them championship belts, and they were soon selling out Madison Square Garden. One of their matches against Antonino Rocca and Miguel Perez drew 20,000+ fans.

Their next stop was Tennessee in 1957, working for promoters Nick Gulas and Roy Welch as the Fargo Brothers, Jackie and Don. The Fargo Brothers became wrestling legends, often the first names mentioned when a fan from the Tennessee–Alabama region reminisces about wrestling from that era. They quickly took the belts from Corsica Joe and Corsica Jean.

Tennessee and Alabama had never seen a tag team like the Fargo Brothers. Many colorful wrestlers had passed through before, but none paid attention to detail like the Fargos. On some nights, in a three fall match they would change trunks after every fall. Their wardrobe included capes, canes, top hats, and leopard skins. The Fargos would strut to the ring, stalling occasionally to sneer and draw more heat. For the rest of the 1950s through the early part of the 1960s Jackie and Don were at the top of the cards throughout Tennessee and as far south as Birmingham.

Sonny, a third Fargo, showed up not long after Don and Jackie began working for Gulas. Sonny Fargo (Jack Faggart) was the legit brother of Jackie. Sonny often worked as a manager/second for Jackie and Don. At one point, Sonny had to step in for Don when Don shot himself practicing quick draw.

Don never liked working for Nick Gulas and eventually took off for greener pastures. He spent the next several years working in various promotions under several different names and gimmicks. Not long after Don left, Jackie turned babyface. His turn was drawn out over several weeks and played out in several cities in the Gulas-Welch territory. Since Len Rossi was the most popular babyface working for Gulas and Welch at the time, it was programmed for Jackie to do a run-in and save Len from a beating. (This was a payback because Gulas used the Fargos to get Len Rossi over with the fans when he first arrived in the territory.)

As a babyface, Jackie continued to be the territory's top draw. He wrestled both singles and as a part of a team with dozens of tag partners, including his brother Sonny, who was the main cog in a crowd pleasing gimmick. Sonny became “Roughhouse” Fargo, who was released from a mental hospital occasionally to help Jackie settle scores.

Jackie Fargo’s signature finishing maneuver was the atomic drop, but it was the Fargo strut that made the fans go crazy, especially when he “went into it” after being thrown into the ropes. Many wrestlers have used the strut as a part of their act, but nobody did it like Jackie.

In 1963, Louis Tillet was brought into Tennessee for a while to work as another one of Jackie's Brother's, Joe Fargo. Sonny, Joe and Jackie often worked six-man tag matches during Joe's short tenure as a Fargo.

In the mid-1960s, promoter Jack Pfefer and Tony Santos "borrowed" Jackie from Gulas and Welch and brought him into Boston as champion. It is worth noting that Jackie was one of the few names that Pfefer and Santos allowed to come in under his own established name.

After Rossi's career ending auto accident in 1972, Fargo worked more often in Birmingham, but still spent most Monday's in Memphis.