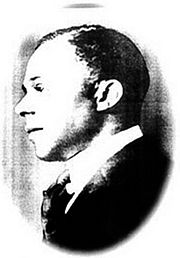 James A. Bray (Born 1870 in Carnesville, Georgia; died 1944) was the first president of Miles Memorial College.

Bray graduated from Atlanta University in 1893 and taught public school. He served one term as president of the Georgia State Teacher's Association before taking charge of Lane College in Jackson, Tennessee in 1903. He came to Miles as president in 1907 and led its transition from Booker City High School to a liberal arts college on a new campus in Corey (now Fairfield).

Bray remained president until 1912, when he was removed by a vote of the trustees and replaced by William A. Bell. His dismissal was, according to him, linked to his criticism of George W. Stewart, a Bishop of the Colored Methodist Episcopal church who served the college as treasurer.

Bray was elected Secretary of Education for the Colored Methodist Episcopal Church in 1914 and became an outspoken opponent of religious discrimination during his term as head of the Fraternal Council of Negro Churches in 1942–43. He led a commission which conferred with President Roosevelt at the White House and also addressed the Republican National Committee. His brother, R. L. Bray, was also a minister of the CME church.