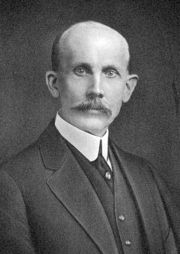 This article is about the hardware dealer, for the Birmingham police chief, see Jamie Moore.

James D. Moore, Sr (born 1853 - ) was an educator and hardware dealer, founder of the Roanoke Institute in Randolph County and of the Moore & Handley Hardware Company in Birmingham.

After leaving the Roanoke Institute, where he was an instructor, Moore partnered with W. A. Handley in a country general store. They moved the business to Birmingham and added Moore's brother Benjamin to form the Moore, Moore & Handley firm, which was incorporated in 1888 as the Moore & Handley Hardware Company.

Moore & Handley became one of the largest wholesale hardware distributers in the United States, profiting not only from its own expanding business but also from favorable real-estate transactions.

Moore was also an investor in the construction and rebuilding of the Metropolitan Hotel downtown.