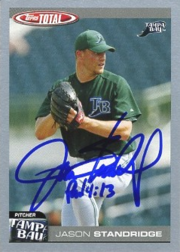 Standridge is the son of Wayne and Donna Standridge of Clay, who home-schooled him until the 10th grade. As a junior he enrolled at Hewitt-Trussville High School, where he made an immediate impact in sports. As a senior pitcher he went 9-1 with a 2.19 ERA. In addition to baseball he competed on the wrestling team and was a standout quarterback and captain of the football team. In his senior season as quarterback, Standridge completed 50 of 95 passes for 689 yards and seven touchdowns in Jack Wood's run-oriented offense. He also rushed for 378 yards and seven more touchdowns. He was a PrepStar All-American, a Birmingham News "Super Senior", and appeared in numerous recruiting lists. He signed a letter of intent for Auburn University, but decided to pursue baseball when he was drafted in the 1st round (31st overall pick) of the 1997 amateur entry draft by the Tampa Bay Devil Rays.

He spent his first year as a pro with the Gulf Coast Devil Rays; a disappointing campaign that resulted in no wins in 13 starts and an ERA of 3.59. In the following year he pitched for the Princeton (West Virginia) Devil Rays of the Appalachian League. He improved his win total, going 4-4, but allowed 49 earned runs in 63 innings for a 7.00 ERA. His first year in Single-A was more promising as he racked up a 9-1 record in 18 starts with the Charleston (South Carolina) RiverDogs. His ERA was 2.02 and he was promoted to the high-A St Petersburg Devil Rays. He went 4-4 for them in 1999 and also started the 2000 season there, going 2-4 in 10 starts before he was promoted to the AA Orlando Rays of the Southern League.

In 2002 he started the year in AAA, going 10-9 in 29 starts with a 3.12 ERA. He appeared for 3 innings of relief in the big leagues that season, allowing 3 runs. The 2003 season again started in Durham with 10 starts there before being called up again to Tampa Bay where he made 7 starts, going 0-5 with a 6.37 ERA. In 2004 he went back down to AA briefly, making two starts for the new Montgomery Biscuits. He returned to Durham for the next 20 starts, earning an 8-4 record and a 3.85 ERA. With Tampa Bay that year he pitched 10 innings in 3 games, one of which he started. He got no decisions but again allowed an earned run in each inning pitched on average.

Standridge started the 2005 season in the Texas Rangers organization, making 10 starts for the AAA Oklahoma RedHawks. He also pitched 2.1 innings for the Rangers before being traded to Cincinnati. He made only two appearances with the AAA Lousiville Bats before being assigned to the Reds' bullpen for middle relief. In 2005 he appeared in 32 games in a Reds uniform, pitching a total of 31 innings of relief with a 2-4 record and 4.06 ERA. He pitched 18.7 innings with a 1-1 record and 4.82 ERA for 2006.

On June 3, 2007, Standridge signed with the Fukona Softbank Hawks, a professional team in Japan. He played 2 seasons for the Hawks. In January 2009, he signed a minor league contract with the Florida Marlins.

As of June 2011, Standridge was in Japan pitching for the Hanshin Tigers.