The Jefferson County Public Health Building was an office and medical clinic building completed in 1948 for the Jefferson County Department of Health. It was located on the northwest corner of 20th Street and 8th Avenue South, a block south of the department's former offices at Jefferson-Hillman Hospital.

George Turner designed the 7-story art-deco style building, which was erected by the Daniel Construction Company. A groundbreaking was held on March 12, 1947. The department moved to the new Guy M. Tate Building at 1400 6th Avenue South in 1979 and the structure was demolished within the next year. The site is currently occupied by UAB's McCallum Basic Health Sciences Building. 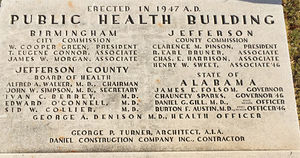