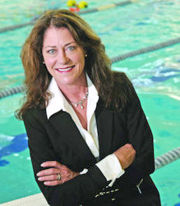 Chandler began diving at age 9 while attending Crestline Elementary School and competed in the Junior Olympics at age 12. She trained at the Ron O'Brien diving school at Point Mallard Park in Decatur and in Columbus, Georgia. She won the AAU national 1-meter springboard event in 1975 and a gold medal at the Pan American Games that summer in Mexico City. The next year she won the national indoor 3-meter springboard championship and went on the represent the United States at the 1976 Summer Olympics in Montreal, Canada, where she won the gold medal. She also won bronze at the 1978 World Aquatics Championships in Berlin before retiring at age 21 due to back injuries.

Since retiring, Chandler attended Ohio State University and earned a bachelor of fine arts at the University of Arizona while occasionally providing commentary for diving broadcasts. She was inducted into the Alabama Sports Hall of Fame in 1985 and later worked for the Hall as educational outreach director. She also worked for HealthSouth and Lakeshore Foundation, and is currently development director for the Vulcan Park Foundation.