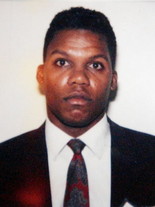 Daniels joined the department in 1992. He was off-duty and out of uniform, buying dinner at Reno's Chicken & Burgers at 541 Graymont Avenue near his home, when an armed man attempted to rob the business. The man fired several times into the restaurant's ceiling and fired once at worker Albert Mitchell, hitting him in the back. Daniels pulled his gun and fired at the robber, but took several return shots to the chest. He collapsed after pursuing him out of the restaurant.

The suspect fled and has not been identified or caught. There is a $32,000 reward for information leading to a conviction. In July 2012 Adam Bradford, an inmate at the St Clair Correctional Facility, was charged with capital murder and attempted murder in the case.

Daniels was survived by a 4-year-old son. He was is one of 49 Birmingham Police officers killed in the line of duty in the department's history. A portion of Graymont Avenue near Center Street was dedicated to Daniels' memory. In 2017 a section of I-65 north between mile markers 263 and 264 was designated as the "Officer Joseph Jerome Daniels Memorial Highway".