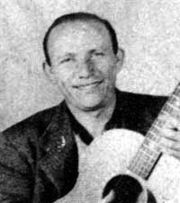 Jimmy Murphy (born October 11, 1925 in Republic; died June 1, 1981) was a country and rockabilly guitarist and singer-songwriter.

Murphy's father, a bricklayer, was a blues enthusiast, and so the young Murphy grew up listening to musicians such as Lead Belly and Blind Boy Fuller. Murphy had already made it to radio by the middle of the 1940s, appearing on WBRC-AM's Happy Hal Burns Show. In 1949 he relocated to Knoxville, Tennessee and auditioned for The Dinner Bell Show, hosted by Archie Campbell on WROL-AM. Campbell had Murphy meet Chet Atkins, whom Murphy eventually gave a demo; RCA Victor subsequently signed him to a publishing deal and recorded him in January 1951 with just himself on guitar and vocals and the Carter Family's Anita Carter playing bass.

Murphy's contract only lasted one year; all of his singles failed to sell. He continued, however, to perform on WROL, and moved to WNOX-AM in the middle of the 1950s. In 1955, Don Law signed Murphy to Columbia Records and had him record a number of rockabilly sides, but none of these charted, and this contract ended in 1956. Murphy followed his father into the bricklaying business and continued playing music on the side, but returned in 1962 to record for Ark Records (Cincinnati, Ohio), Midnite (Grand Rapids, Michigan), REM (Lexington, Kentucky) Loyal (Birmingham), Rimrock (Concord, Arkansas), and Starday (Beaumont, Texas) over the next several years.

Murphy went into retirement until the Library of Congress re-released his first single, "Electricity", on a compilation. Musicologist Richard Spottswood tracked Murphy down and asked him to begin recording again; the result was the full-length Electricity, released on Sugar Hill Records in 1978. Further recording and a tour had been planned, but Murphy died in 1981 before they could be completed. He has remained a cult figure among rockabilly enthusiasts, and in 1989 Bear Family Records collected his RCA and Columbia recordings and issued them on CD as Sixteen Tons of Rock & Roll.