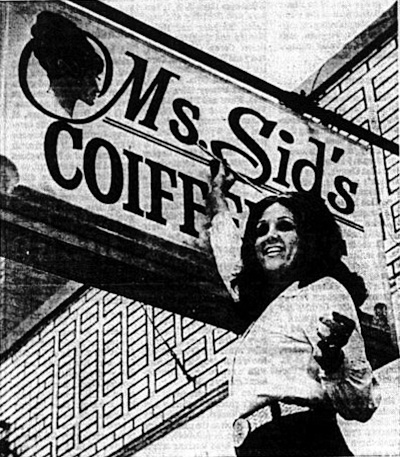 Jody Ford posing with the sign for her hair salon

Ford attended David Lipscomb College in Nashville and starred on the Bisons' basketball team. He married and had a son and played some semi-professional football with the Miami Bombers in the 1962 season. Eventually he accepted that he identified as a female. The crisis led to a divorce from his wife, which included no right to see his son. His gender identity did not make him feel welcomed in the homosexual community any more than among straight people.

Ford earned a business degree at Tulane University in New Orleans. She moved from Louisiana to Birmingham in 1965 with companion Freada Wallace. He soon married a woman named Wanda and opened Mr Sid's Coiffures at 1004 20th Street South in Five Points South in 1968. Between 1972 and 1974 Ford underwent sexual reassignment surgery at the UCLA Medical Center in Los Angeles, California. She changed the sign at her salon to read "Ms Sid's" and lived openly as a transsexual, demanding to be referred to as a woman. She was known as a skilled stylist and recognized around town driving her yellow Cadillac.

On the evening of April 4, 1977, a Monday marked by a deadly tornado in Smithfield, Jody and Wanda went to the Brookwood Village cinema to watch a movie together. Outside the theater they exchanged words with motel manager Larry Maddox. Incensed, Ford followed Maddox back to the Vestavia Motor Lodge and confronted him again in the parking lot. He retrieved a .16 caliber automatic shotgun from the motel office and shot and killed Ford. He claimed self defense and was acquitted of murder.