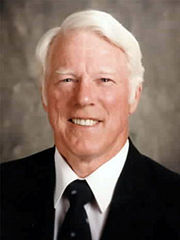 Bearden was the son of former Commissioner Ned Bearden. He graduated from Thompson High School and completed an agricultural degree at Auburn University in 1952. From then until selling it in 2000, he and his brothers operated the family's 1,500-acre dairy farm in Helena. He has served on the Alabama Farmers Federation dairy committee and as director of the Alabama Farmers Cooperative.

Bearden was a member of the Helena City Council. He was first elected to the Shelby County Commission, representing District 5, in the 1990s. He was re-elected in 2012, but died the day after the election at Shelby Baptist Medical Center.

Bearden and his wife, Peggy, had four daughters: Jan, Mickey, Kim and Staci.