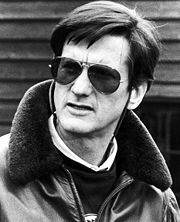 Badham is the son of English actress Mary Hewitt, who married Army General Henry Badham Jr after World War II. They moved from England to a house at Highland Avenue and 33rd Street South in Birmingham in 1945. He became a naturalized U. S. citizen in 1946 at the age of seven. Mary Badham, John's stepsister, was born in 1952 and later, while he was in drama school at Yale, starred as Scout Finch in the 1962 film adaptation of To Kill a Mockingbird, for which she was nominated for an Oscar.

He graduated from Indian Springs School in 1957 and completed a bachelor of arts in philosophy (1961) and master of fine arts in directing at Yale University. He spent a year in the Army between studies before entering the television business, with Gregory Peck's help, as a mailroom assistant at Universal Studios. From there he was invited to help conduct tours of the facility, and later got involved in casting. He soon graduated to editing film trailers and television series.

In TV he is noted for assisting Steven Spielberg on, and directing five episodes of, Rod Serling's "Night Gallery" series, for which he was nominated for an Emmy Award. His breakthrough film was as a last-minute replacement for John G. Avildsen helming 1977's Saturday Night Fever. The dance floor at The Club provided inspiration for a scene with John Travolta. In 1984 he formed his own production company, the "Great American Picture Show Company".

Badham has been married three times. His daughter, Kelly MacDonald, was born to his first wife, Bonnie Sue Hughes (1967-79). He later married Jan Speck (1983-90), and is currently wedded to Olivia Laughlin (1992-) He was a 2000 inductee into the Alabama Stage and Screen Hall of Fame. He has a star on the Alabama Walk of Fame, and the "John Badham Theater" at Indian Springs School, where he served on the board of trustees for nearly two decades, is named for him.

Badham currently teaches at the Lawrence and Kristina Dodge College of Film and Media Arts at Chapman University in Orange, California. 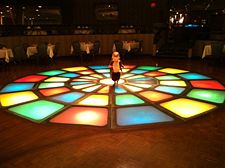 The dance floor at The Club