This article is about the church founder. For similarly named people, see John Brown (disambiguation). 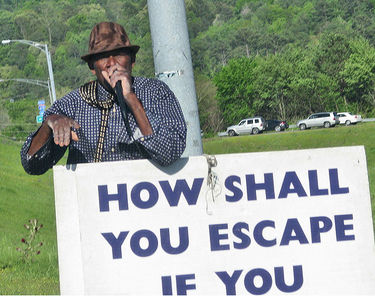 Reverend John Brown or Browne (born January 1940 in Jamaica; died August 8, 2020 in Birmingham), also known as the Jesus Man, was a street preacher and founder of the Power of God Deliverance Ministry.

Brown moved from his native Jamaica to Miami in 1962, and attended a Bible school in New Jersey. He married a Birmingham native of Haitian descent there, and moved South in the 1970s.

Since 2002, Brown has regularly stationed himself on Lakeshore Parkway in front of the Wildwood Shopping Center with numerous signs proclaiming Jesus. He states that God led him to the spot, which he considers to be "holy ground". He is normally present there from noon until 9:00 PM on weekends, and has not missed a Sunday in 10 years. At some point, Brown began sporting gold-plated lower teeth that spelled out "JESUS".

Brown lost two residential properties which he was renting to needy families, as well as his 1993 Cadillac to a 2003 fire. In January 2008 the church housing his nondenominational ministry in Five Points West was also destroyed by fire.