This article is about the mining engineer. For other uses, see John Adams (disambiguation). 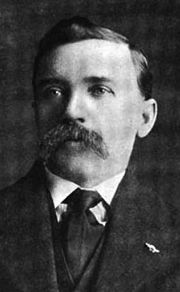 Adams' family had long been involved in iron mining in England's ore mining areas of Birmingham, Staffordshire and Warwickshire. His father, John, Sr, managed the Hallfield Iron Works in Bilston. Young John attended the Dudley Grammar School in Birmingham and the Mechanical Institute of Staffordshire. He accompanied his father to Pennsylvania and later Chattanooga. In the winter of 1879 Adams worked as superintendent of the Roane Iron Works where chemist William Caldwell was analyzing ore from the Birmingham District sent to him by Robert Stephens.

Adams married Annie Williams in 1880. He and Caldwell came to Birmingham later that same year. Caldwell was installed as president of the newly-established Birmingham Rolling Mill Company. Adams assisted A. J. Mothan in the design and construction of the mill, then left to manage ore mines at Ruffner, Irondale and Sloss for the Sloss Furnace Company. In 1886 Adams returned to Chattanooga to manage the Tredegar Rolling Mills there. He soon returned to Alabama as head of the Bessemer Rolling Mills and took on the added responsibility of overseeing the Alice Mines, Wade's Gap Mines, Redding Mines, and other operations for the Morris Mining Company. Shortly before the Republic Steel & Iron Company took over the Pioneer Mining & Manufacturing Company, Adams was brought on to manage its mines and mills until his retirement in 1906. In the meantime, he acted as agent for Pennsylvania investor Robert Sayre in establishing mines around the community which became known as Sayreton. Adams served as vice president and manager until 1910, when he left to pursue a career as an independent consulting engineer.

From his home office in the American Trust Building, Adams traveled throughout the South and in England and Europe for his consulting business. World War I curtailed his overseas activities and he assisted in the establishment of the Birmingham-Trussville Iron Company which constructed a blast furnace in Trussville. In 1922 Adams was elected president of the O'Neals Lime Works at Eureka.

By the end of the 1920s, Adams was also active in local politics, chairing the Birmingham Zoning Commission.

Adams also enjoyed writing songs and verse. He composed songs performed at the dedication of the Sayreton School and for events in Bethlehem, Pennsylvania over which Sayre presided. He also penned the lines of verse, later dubbed "Vulcan's Prophecy" for a plaque which accompanied Vulcan to his debut at the 1904 World's Fair in St Louis, Missouri.