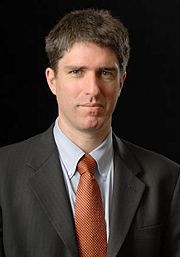 John P. Strohm (born March 23, 1967 in Bloomington, Indiana) is the president of Rounder Records in Nashville, Tennessee. He recorded as a professional musician from 1987 to 2007 and practiced as an attorney from 2004 until taking his present position in 2017.

Strohm grew up in Bloomington as the son of an English professor and university administrator. He began his musical career playing drums in Indiana's punk rock scene, then moved to Boston in 1985 and enrolled as a student at the Berklee College of Music.

While in Boston he took up the guitar and became involved in the local indie rock scence. He joined Juliana Hatfield and girlfriend Freda Love to form the indie rock trio Blake Babies in 1986. The name was suggested by poet Allen Ginsberg after a reading at Harvard. The group enjoyed enough success, primarily among college-radio audiences, for Strohm to drop out of Berklee in 1987 to record and tour with the group.

Following the breakup of the Blake Babies in 1991, Strohm and Love joined with Jake Smith to form the band Antenna, which stayed together until 1995, when it evolved into Velo Deluxe with Kenny Childers and Mitch Harris, touring for a year in support of "Superelastic" before disbanding in 1996. That year he put together the country band The Hello Strangers with Harris and Glen Hicks. Strohm was also the first drummer for the Lemonheads, rejoining that group in the late 90s as a guitarist. The Blake Babies reunited for a tour soon after, but by that time, Strohm was working on a new career. He had followed his wife, Heather, to Birmingham, where he recorded his Vestavia album, released on Flat Earth Records in 1999.

Strohm and his wife, Heather, have three children.