This article is about the Baptist minister. For the clothier, see John Porter (Porter's). 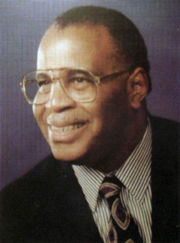 Porter, the youngest of three children born to Robert and Emma Porter, grew up in Titusville. He attended Washington Elementary School and Ullman High School before graduating from Industrial High School in 1948.

Porter attended Alabama State University in Montgomery. earing a bachelor's in history and English in 1955. He was also president of the student government association and of his Alpha Phi Alpha fraternity chapter. While living there he met Martin Luther King, Jr, then pastor at Dexter Avenue Baptist Church. He accepted King's invitation to become a pulpit associate, and the two became close friends.

Porter later studied for a master of divinity at degree at Morehouse College in Atlanta and working at Martin Luther King, Sr's Ebenezer Baptist Church. After graduating in 1958 he began his ministry as pastor of First Institutional Baptist Church of Hamtramck, Michigan. Nearly four years later he answered the call from 6th Avenue Baptist. He was recommended for the vacancy left by the death of John Goodgame, Jr by King, who also preached at Porter's installation.

During his first year, Porter organized the 6th Avenue Baptist Federal Credit Union. In 1969 he led the church in the construction of a new 12-acre campus on Montevallo Road. With the help of his wife, Dorothy, he improved the church's music and cultural arts programs. Porter was also active in the Civil Rights Movement with the Southern Christian Leadership Conference. He assisted in the SCLC's efforts in Albany, Georgia and was one of the leaders of the Birmingham Campaign, serving on the Central Committee.

On Palm Sunday, April 7, 1963, Porter and fellow ministers Nelson Smith and A. D. King led a group of 2,000 marchers to protest the jailing of marchers the day before. He was also one of four leaders of a mass march from Thirgood Memorial CME Church on Easter Sunday, April 14, and was arrested along with A. D. King, Smith and Frank Dukes.

In October 1967 he was arrested, along with Fred Shuttlesworth, T. L. Fisher and J. W. Hayes on contempt charges stemming from the 1963 demonstrations.

Porter was an Alabama State Representative for Alabama House District 39 from 1974 to 1977. That year he was appointed by Governor George Wallace to the Alabama State Board of Pardons and Paroles from then until 1989. Porter joined the Samford University Board of Trustees in 1991. He provided stories from his life to Paul Hemphill's memoir "Leaving Birmingham", published in 1993.

Porter's pulpit was assumed after his retirement in August 2000 by Al Sutton. He died of heart failure in February 2006 and was survived by his wife, Dorothy and two children: Mia and Robert. The Kneeling ministers statue in Kelly Ingram Park depicts him alongside A. D. King and Nelson Smith, kneeling in prayer at the culmination of the Palm Sunday March.