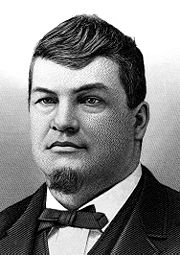 John Talieferro Terry (born August 31, 1831 in Chester, South Carolina – died 1890 in Birmingham) was an attorney and a central figure in the founding of Birmingham City Schools.

Terry is the son of John W. and Emily Taliaferro Terry whose ancestors came to the American colonies from Britain in the 16th century. In 1835 the family relocated their farm to Alabama, settling near Pickensville in Pickens County. After his father died in 1841, Terry became a ward of attorney Robert T. Johnson, who saw to it that John was entered in the University of Alabama.

Terry left Tuscaloosa in 1848 for health reasons, but returned to study two years later at the University of Louisville School of Law. Ill health again forced him to return home, where he continued his studies under Johnson's tutelage. In 1852 he began working as a schoolteacher and earned his license to practice law. He and his guardian entered into a partnership and opened a law office in Carrollton. He served briefly as Register in Chancery and ran unsuccessfully as a Whig Party candidate for the Alabama Legislature in 1856. A year later he became partner to Turner Reavis and married the former Elizabeth Kerr. He continued to work until entering the Confederate army as a 1st Lieutenant in 1862. He was honorably discharged in 1863 as a Colonel, suffering again from poor health.

Terry resumed his Carrollton law practice in 1865. In 1873 he relocated to the newly-founded city of Birmingham to work for the Elyton Land Company in the early business of the city's development, serving as city attorney for a 1 year term. He lost his wife, then the mother of six, to the terrible epidemic of cholera which struck the city that year.

Almost as soon as he arrived, Terry set about to plan the establishment of a system of public schools in Birmingham. He was the prime investor in the city's first $3,000 issue of bonds for school construction, lending additional funds when construction of the Free School went over budget. In 1874 he remarried, to the former Mary E. Taylor.

Terry constructed the Terry Building on the southeast corner of 2nd Avenue North and 19th Street in 1881 for his offices. He resigned from the practice of law in 1885 and died 5 years later. He is interred at Oak Hill Cemetery. In 1906 Terry's home on 7th Avenue North was torn down to become the site of the first Birmingham High School (now Phillips High School).