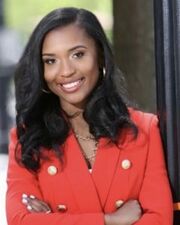 Jordyn Hudson (born c. 2003 in Birmingham) is the founder of the Shape the Culture digital platform, and the producer and director of the documentary film "Shape the Culture: Then and Now".

Hudson attended Indian Springs School and, in addition to choir and mock trial, was involved in the Student Government Association, the Student Ambassador Program, Heritage Panel, Gender Equity Club, and the Black Student Caucus. She developed a diversity and inclusion initiative which was adopted into the school's constitution. She also participated in Youth Serve Birmingham, the Youth Philanthropy Council, and the Alabama Youth Legislature. With the Alabama YMCA she served as head lobbyist in the Youth in Government program, and as a judge in the Youth Judicial program.

Her "Shape the Culture" initiative was inspired by the enthusiasm she experienced during an ACLU-sponsored advocacy program which she attended on an Abroms Scholarship. Her work to improve racial equity in the community was recognized with a 2021 Princeton Prize in Race Relations. She graduated in 2021 and is currently attending Spelman College in Atlanta, Georgia.