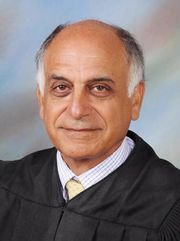 Boohaker was the fourth child born to Louis A. and Helen M. Boohaker of Birmingham. He earned his bachelor of science in accounting at the University of Alabama in 1976 and his juris doctorate from the University of Alabama School of Law in 1979. He served a a clerk in the 11th Judicial Circuit of Alabama in Lauderdale County for a year, and married the his wife, Maggie in 1982. He practiced as an attorney for twenty years before he was elected to the bench in 2000.

Among Boohaker's notable decisions was his 2013 order closing New Woman All Women Health Care, an abortion clinic on 10th Avenue South previously targeted by terrorist bomber Eric Robert Rudolph. In 2016 he presided over a medical negligence and fraud case against Brookwood Medical Center over its marketing for "natural childbirth" options. In the same year he ordered changes to the county's bail bond system reducing the time that inmates could be held without access to counsel. Boohaker retired from the bench on February 29, 2020.

In addition to his service on the bench, Boohaker served on the board of directors of Leadership Birmingham and held several executive positions in the East Kiwanis Club. He was an active member and former president of the American Lebanese League and a founding member and policy chair of the National Alliance of Lebanese Americans. He has also served as policy chair for the non-profit In Defense of Christians.

Boohaker died in June 2020. He was survived by his wife, three children, and two grandchildren. His funeral mass was observed at St Elias Maronite Catholic Church.