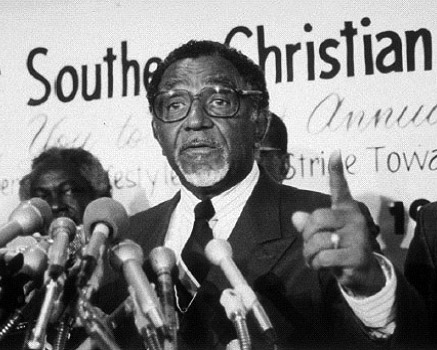 Joseph Echols Lowery (born October 6, 1921 in Hunstville, Madison County; died March 27, 2020 in Atlanta, Georgia) was a Methodist minister and a co-founder and long-time president of the Southern Christian Leadership Conference.

Joseph was the son of LeRoy and Dora Lowery of Huntsville. He lived with relatives in Chicago during middle school, then returned to Alabama to complete high school. He attended Knoxville College and Alabama A&M before graduating from Paine College in Augusta, Georgia. He married Evelyn Gibson in 1950 and became pastor of Warren Street United Methodist Church in Mobile in 1952.

As president of the Alabama Civic Affairs Association, Lowery became one of the leaders of the Montgomery bus boycott which followed the arrest of Rosa Parks in 1955. In 1957 he joined with Martin Luther King, Fred Shuttlesworth, Ralph Abernathy, C. K. Steele and dozens of other ministers to found the Southern Christian Leadership Conference which grew into its central role in the planned non-violent demonstrations of the Southern civil rights movement. He was soon elected vice president of the organization.

Lowery was a defendant in a libel suit initiated by the police commissioner of Montgomery in response to an ad placed in the Times seeking funds for King's defense on charges of falsifying tax returns. His car was seized after a local jury found for the plaintiff. The ruling was overturned by the United States Supreme Court in 1964 (New York Times v. Sullivan). Meanwhile Lowery had moved to Nashville, Tennessee where he continued to lead sit-ins and marches. He chaired the delegation that delivered the demands of the Selma to Montgomery March to Governor George Wallace.

He succeeded Abernathy as SCLC president in 1977 and remained in that position for 20 years. He co-founded the Black Leadership Forum which campaigned for human rights in the Middle East and South Africa, and Lowery was one of five African Americans arrested during the "Free South Africa" demonstrations at the South African Embassy in Washington D.C. In 1982 he joined Jesse Jackson on a march from Tuskegee to Washington campaigning for extensions of the Voting Rights Act of 1965.

Lowery retired from the pulpit in 1992 and left the SCLC in 1997. His comments at Coretta Scott King's funeral contrasting U. S. intervention in Iraq with the continuing plight of the poor at home were considered controversial by some, but received a standing ovation at the ceremony. Lowery later gave the benediction at President Barack Obama's inauguration. His strident quotations from "Lift Every Voice and Sing" and from Big Bill Broonzy's "Black, Brown and White" also earned criticism.

Lowery received a lifetime achievement award from the NAACP in 1997. In 2001 Clark Atlanta University established the Joseph E. Lowery Institute for Justice and Human Rights. Atlanta renamed the former Ashby Street, which runs past several historically-black colleges, in his honor. He was given the Whitney M. Young, Jr. Lifetime Achievement Award by the National Urban League in 2004. In 2009 Lowery received the Fred L. Shuttlesworth Human Rights Award from the Birmingham Civil Rights Institute and a Presidential Medal of Freedom from President Barack Obama.

Lowery died at home in Atlanta in March 2020. Due to the limitations on public gatherings required to slow the 2020 Coronavirus pandemic, the Lowery family held a small funeral and planned a larger celebration of Lowery's life for the fall.